Peter Okoye, Mr. P, of the defunct Psqare music group has exposed a follower who bashed him earlier today, but had begged him for money 2 years ago.

The follower had taken to the singer’s comment section to call him out for mixing his song with those of the late Michael Jackson, but he probably forgot he had once sought the help of the Nigerian pop star.

Mr. P, however, took to his page to expose the man.

See screenshot of the DM the fan sent to Mr. P: 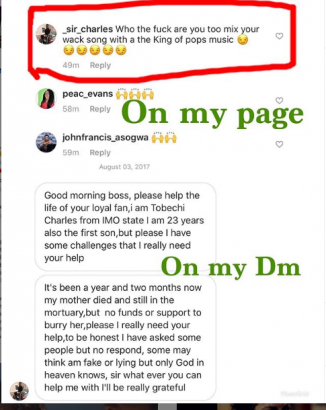 Reacting to the post, his loyal fans blasted the man and labeled him a confused being who doesn’t understand the direction to go:

*** LWKM 😂😂 pple can be funny o.. See this big fool o.. The same song u calling Wack is the same source of his Money… The same place where he gets his earning.. U go dm dey beg for help but u dey comment dey insult the source by which this person u beg gets his earnings..

Ion blame u sha.. The type of Una no know Watin una want for life.. Double minded pigeon.. Tell me how u wan take make am with this kind attitude

*** Mr P actually wanted to DM him or blast him when he soft-pedaled after he realised the man do beg before before.